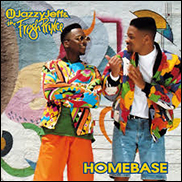 LOS ANGELES (CelebrityAccess) — Okay, maybe it has not been as long as when the Walkman was hip that Will Smith made his last album, but it was the rage the last time Smith recorded with DJ Jazzy Jeff.


DJ Jazzy Jeff & The Fresh Prince have not made music together for almost three decades and it has been months of speculation it the two were going to reunite and even go on a tour.


Will Smith has revealed that he plans to tour again with his former musical partner. Smith has been back at work in the studio and plans on hitting the UK this summer with Jazzy Jeff.


Speaking on ‘The Graham Norton Show’, Smith said: “I’ve been working on something and this. We’ve recorded about 25 songs and have four or five I actually like. Jeff and I will be back here (in the U.K.), this summer to do shows – real shows.”


On The Tonight Show Starring Jimmy Fallon, Will Smith had this to say about the duo touring


"We never had a chance to really go out and tour,” Will Smith says to Fallon, recalling the early days of his work as one-half of DJ Jazzy Jeff & The Fresh Prince before his The Fresh Prince of Bel-Air sitcom became a hit.


Smith added, "We decided a couple months ago, you know what, we have to go out one good time because we never really had a chance to go out and blaze it up,” Smith says.
"I'm pretty certain I'm going on tour," Smith said on the show. "Jeff and I actually never have done a full tour. I was always on the Fresh Prince of Bel-Air. I was always either making a movie, so we've never actually done a full tour. So I'm looking this summer to be the first time that we go out on a full world tour.” – Staff Writers