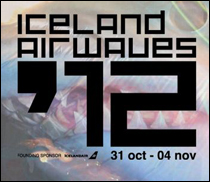 REYKJAVIK, Iceland (CelebrityAccess MediaWire) — Reyka Vodka has announced the winners for their "Breakthrough at Iceland Airwaves," which will allow two up-and-coming American bands a shot onstage at this years' Iceland Airwaves festival. The two bands headed to Reykjavik this year are Vacationer and Blouse.

Formed in 2011 as a side project for Philly-based singer/songwriter/multi-instrumentalist Kenny Vasoli, Vacationer blends the escapist dream pop of Beach House with the electro-pop of Animal Collective. Vacationer released its debut EP in 2011, followed by the full-length Gone in 2012; both were put out by Downtown Records.

"It's always been a dream to get to travel to Iceland; it's such a beautiful place and there are some truly amazing bands/artists that we admire that have come out of Iceland, and we couldn't think of a better way to do it by playing Iceland Airwaves,” remarked Vacationer lead singer Kenny Vasoli. “Vacationing is an underlying theme of our band, and getting to see Sigur Ros play in Iceland and getting to take a dip in the Blue Lagoon as well as playing Airwaves is something that we can barely comprehend. We'd love to thank Reyka Vodka and Iceland Airwaves for making this happen."

Blouse, a Portland, Oregon-based electronic pop trio features Charlie Hilton, Patrick Adams, and Jacob Portrait. The group signed with Brooklyn-based label Captured Tracks in 2011. That year Blouse also released a slew of singles, including their debut 7" Into Black/Firestarter that March and their Sub Pop release Shadow that May. That November, Blouse's self-titled debut arrived.

"We can't think of a better way to spend Halloween,” commented Blouse frontman Charlie Hilton. “Thank you Iceland Airwaves and Reyka Vodka for inviting us. We've heard good things about you."

Vacationer and Blouse will join the lineup of more than 200 confirmed acts who are set to play at the fest, including Dirty Projectors, Of Monsters and Men andSigur Rós. The festival is set to take place from October 31 – November 4, 2012. – CelebrityAccess Staff Writers