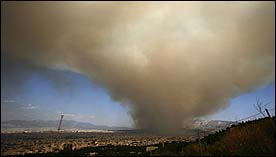 SPOKANE, (CelebrityAccess MediaWire) — Organizers were forced to cancel a pair of events in Idaho due to an encroaching wildfire that has forced thousands of residents to be evacuated. The blaze, started by lightning on August 17th, has consumed over 70 square miles near the Sun Valley Resort ski area.

An appearance by Chris Isaak and Kenny Loggins that had been scheduled for Friday, August 31st at Greyhound Park Amphitheater has been canceled. No rescheduled date has been posted at this time.

A Labor Day weekend festival in Ketchum has also been canceled. The annual Wagon Day Celebration. As a part of the festival, a series of concerts had been planned over the course of the weekend with performances by Michael Franti, Rose Hill Drive, Joseph Israel & The Jerusalem Band planned on Friday, Matisyahu, Wisdom, Ivan Neville’s Dumpstaphunk on Saturday, Kenny Loggins, Chris Isaak, Brandi Carlisle on Sunday and the Bellevue Bluegrass Festival on Monday.

Ticketweb tickets purchased at a Ticketweb outlet should be sent back to Ticketweb at: Ticketweb Refunds PO Box 77250 San Francisco, CA 94107 Tickets bought on line or via phone will automatically be refunded.

"It is with deep regret that I announce that the 2007 Wagon Days Celebration and other events that have been cancelled due to the unprecedented effect of the Castle Rock Fire on the Ketchum area," The Idaho Statesman quoted Ketchum Mayor Randy Hall as saying. "This was not an easy decision for the Ketchum City Council, and several factors contributed to the decision. First, another weather front is headed for the Valley next weekend. If we are hit with high winds again, the Labor Day events will interfere with our ability to meet the safety needs of the Community. I will not compromise the firefighting effort nor compromise the safety of our community."

Ivan Dumphastfunk, Modest Yahoo and Kenny Loggins will instead play a September 1st concert at the Tamarack ski resort on September 1st. Tickets for the canceled dates will be honored.