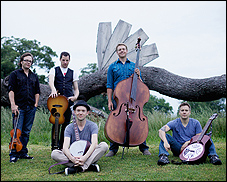 NEW YORK (CelebrityAccess) — Grammy-nominated bluegrass stalwarts The Infamous Stringdusters have announced the release of their newest EP, Undercover, ahead of their upcoming fall tour of North America.

Undercover, laid down during a recent recording session in their Colorado studio, features a collection of covers that includes Pink Floyd's "Fearless," Tom Petty's "American Girl," Johnny Cash's "Big River," Bob Dylan's "Don't Think Twice" and "Highwayman" from the Highwaymen (Cash, Jennings, Nelson, Kristofferson). The songs were all recorded live in the studio, with the entire band in one room in order to capture the essence of the band's live shows. The EP is due in stores on October 9th.

"We had a great summer touring and wanted to get right into the studio," says band member Andy Hall. "But we didn't want to get into a cycle of tour-write-record-tour, so we sat down to capture some of the energy of songs that get the biggest reaction live."

Following the release of the EP, the group, comrpised of Andy Hall (dobro), Andy Falco (guitar), Chris Pandolfi (banjo), Jeremy Garrett (fiddle), and Travis Book (upright bass), will hit the road, starting with a pair of dates on Oct. 29th & 30th at the Brooklyn Bowl in Brooklyn, New York and winding up on Nov. 14th at the Orange Peel in Asheville, N.C. – Staff Writers