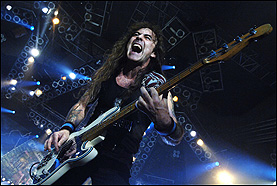 (CelebrityAccess MediaWire) — Dates for the European leg of the Iron Maiden world tour have been confirmed.

The World Tour will start in Scandinavia on November 9 and response to the shows on sale there last week was phenomenal with ticket sales already exceeding 95,000 across the Scandinavian dates. All three of the Swedish shows sold out in just over an hour and a third date was immediately added at the Stockholm Globen which also sold out in hours making it 48,000 sold out in Sweden alone. The 8000 tickets in Bergen Norway went in just 30 minutes, Tempere sold all 6,600 tickets out in a couple of hours while Helsinki registered first day sales of over 17,000 tickets over their two shows.

The new live show will include new album material which the band are now recording and which will be released prior to the tour.

Says Steve Harris, "We've finished most of the writing of the album and have just started recording with Kevin Shirley so we're all very charged up at the moment to make a great record. Reaction to the tour so far has been brilliant and we're looking forward to putting a great show together for the fans and getting back out on the road towards the end of the year and playing new material live"

Orlando metal outfit Trivium will be joining Iron Maiden as their special guests throughout the tour.

This European leg of the World Tour will be followed in early 2007 with selected dates in other parts of the World.

For the dates in the UK there is an exclusive 5 day special advance ticket ordering access for fan club members. There will be a special link in the Tour date area of the website and advance tickets for fan club go on sale on Friday 10th March at 9am in the UK and 9am Wednesday 22nd March for Dublin. After that tickets to the General Public for the UK shows will go on sale Friday 17th March at 9am, and on sale 9am Saturday 25th March for Dublin. For more information on exclusive advance ticket purchase access go to www.ironmaidenonlineclub.com — CelebrityAccess Staff Writers