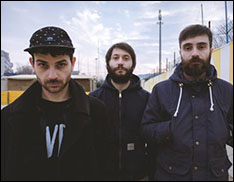 SEATTLE (CelebrityAccess) — Italian rock band Soviet Soviet missed their performance at the South by Southwest Music Festival after they were detained and deported while trying to enter the US.

The band reported that they were individually interrogated and held in cells.

“We spent the night in jail and had been escorted there as though we were three criminals. The following day, after having completed all jail-related procedures (mugshots, declaration of good health and signatures), two other agents came to get us,” the band’s statement says.

The group was scheduled to do a radio performance at Seattle NPR affiliate KEXP before heading to Austin for SXSW.

In a statement to Seattle's KEXP, Customs And Border Protection said:

“When a traveler is deemed inadmissible, CBP makes every effort to return the traveler without delay. CBP does not have an overnight detention facility at the airport. Therefore, it is standard procedure for any traveler who is deemed inadmissible and is awaiting return travel to be taken to a detention center until return travel is available. According to CBP policy, it is standard procedure to restrain a traveler who is being transported to a detention facility. The use of restraints on detainees during transport is in a manner that is safe, secure, humane, and professional. It is the responsibility of officers to ensure that the need and level of restraints used is consistent with the operational office’s policies and procedures. At no time are restraints used in a punitive manner or in a manner that causes detainees undue pain.”