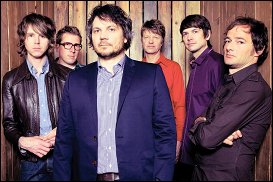 BOSTON (Hypebot) — Jeff Tweedy and Wilco are playing a benefit concert for Massachusetts contemporary art museum MASS Moca this summer. But beyond the unusual venue and 1000 limit on admissions, Wilco fans are likely to be most excited how the band, the museum and concert promoter Alex Crothers of Higher Ground are pricing and distributing tickets.

Instead of the often frustrating method of awarding concert tickets to whomever breaks through an online or telephone queue – a practice that often favors scalpers – tickets for the concert are being sold through a unique combination of “Name your Own Price” auction and lottery.

“It’s an experiment, which we hope proves to be more civilized, more fair, and more fun than the standard mode of ticket sales,” said MASS MoCA Director Joseph Thompson, “and we hope it brings MASS MoCA the strong charitable support which is at the heart of this special evening.”

Only Two Ways To Get Tickets

The first 500 tickets will be sold to bidders who make the highest offers between 10 AM on Friday, April 13, and runs through 10 AM on Monday, April 16. To maximize their chances of getting tickets and support MASS MoCA, bidders are urged to bid high.

But those whose bid not score one of the first 500 tickets will become part of an exclusive random lottery. Bidders drawn from a hat will be offered the opportunity to purchase a pair of tickets at whatever price the named on their original bid.

In addition to creating a simple solution that rewards both high bidders and average fans, Wilco, MASS MoCA and Higher Ground Concerts will be capturing email address of thousands of engaged fans that are likely to support future concerts.