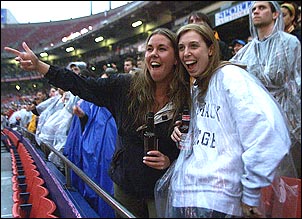 (CelebrityAccess News Service) – So we know many of you in the music business have heard horror stories about the Field Day Festival. Dreamed up by one hell of a nice guy in Andrew Dreskin, the festival much like Coachella was modeled after the big European music festivals. With artists including Radio Head, Beastie Boys and Blur, the two day camping festival was set to play June 7 & 8 in Calverton, New York (a small town at the fork of Long Island.) Unfortunately, as many of you know, New York State means tackling the 'Mass Gathering Permit'. This permit is a bear. From traffic plans, to water systems, to engineering on anything standing, it is a tuff nut to crack, but Field Day had a team in place to deal with such things.

The Project Manager, Site Engineer, Site Manager, Production Manager, Front of House Manager, etc. had all been through this multiple times and knew how to make everything ready for inspection 48 hours prior to doors as specified by New York State. As we really started to make headway on the site preparation (perimeter fencing, campgrounds, parking, road building, etc.) we got word that for some strange reason the Suffolk County Police were pulling out as our police force. No police force, no permit. Right after the police pulled out, the Suffolk County Health Department instructed the press that their office had stopped the permit process for the Field Day event because there were now no police for the event that was now less than two weeks away. But we were told to keep working so we did.

Everyone on the site on Long Island was feeling very strange. We were reading, hearing and seeing all of the press saying there would be no show, yet working long hours in the rain, spending money and charging on. Artist managers kept calling us asking if we knew anything they didn't. We just kept saying the same things we are building a site for a big rock show. Everyone felt in the end that we would find a police force and there would be a permit and a show. Our job was to get the site compliant and ready for inspections, which we did. As if the permit and police issues weren't enough, someone decided to throw the Field Day organizers a lawsuit claiming we were destroying the environment. Although the suit had no merit since all we really did was cut the grass at an old airbase, the press made a big deal of it. Of course, little was mentioned when a judge dismissed the case and even gave a little lecture to the opposing lawyer. That wasn't news.

Andrew was not alone in his fight as the folks from Goldenvoice and AEG signed on as partners of the event. Everyone used their political muscle to try and get the New York State Police involved as the Field Day police force (a role in which the state force did not have a good experience with during Woodstock '99). Regardless, it now went from hopeless to the State Police dispatching a Superintendent from Albany to get a better understanding of the situation. We kept building.

In fact, when we got the call on the radio for department heads to come to the production office, we had everything basically done. The stages were up, campsites and parking laid out, ten's of thousands of feet of water system, miles of perimeter fencing, hundreds of port-a-johns, sinks, trash cans, medical tents, artist trailers, phone lines, toll booths, all laid-out and ready for inspection. To give you an idea of the scope of the infrastructure put in place; we had to have 17 sinks with hot running water just for artist and production catering alone. So anyway, we all kind of looked at each other when told there would be no Long Island Field Day and started to make calls and plans to take it all down. There was talk about moving everything to Giants Stadium (this was the second time this option was brought up it had been tossed around about a week prior) but no one knew for sure.

After about an hour or so of getting the load-out started, a few of us were told to pack up our stuff as quickly as we could. When we got to our hotel (the lovely Best Western in Riverhead), we were told to pack-up our stuff and checkout as we were heading to Giants Stadium. It was dark and raining cats and dogs, but we had to make it to the radio show going on at the stadium to try and keep the stage and some of the other production being used that night for Eminem for our show in a few days. Yes, the production would have a ruff time; yes the folks at AEG had the ugly job of speaking to the artist's reps to see who could play the two-day event that now had become a one-day event. But, if we could make the artist's schedules and the stage and production work, we were doing a show. So we sat there at the radio show with the various promoters and production vendors working out the details of how they would move some stuff out and leave other stuff for us to use while the rain kept on pounding away. The good news was we would not have to build a stadium stage since Stage Co had a nice one sitting there for us.

On top of everything else, Field Day had some 60,000 tickets sold over the two days. The problem with that was it was for a General Admission show, which is not allowed at Giants Stadium. All of the tickets needed to be refunded and the new show put on-sale. To make matters worse, many of the people traveling to the show had camping tickets (there is no camping in Giants Stadium's parking lots) or were holding rooms on Long Island that the hotels/motels would not let them out of. Regardless, there would still be a show.

The day of show finally came and of course it was raining hard. There would be no walk-up with that rain and with less than two days to sell the show; we were lucky to get the 25,000 we did. Now in this soft ticket sales market, selling 25,000 tickets in two days is really something, but 25,000 people in Giants Stadium in the pouring rain are something different all together. Let's just say the only events to sell fewer tickets in the stadium are the stadium's home soccer team, the MetroStars. Regardless, the band's played on. We can't say whether the show was good or not, we have heard conflicting reports. What we do know is that good people lost a lot of money for no reason and there was a group of people working night and day to make the show happen. This should be a scar that everyone who worked on Field Day wears with pride, but that will not happen. All people want to talk about is how jinxed the show was. Well it was, but it still happened. This was a real case of the show must go on.

So all of you, who worked on Field Day, wear your scars with pride. In addition special thanks and mention need to go to Mo Morrison, Andrew Dreskin, Brian Cooper, Neil Ryan, Debra Rathwell, Joe Pollack, everyone who worked their ass off on the crew, everyone at AEG, Concerts West, Golden Voice, Giants Stadium, all the production vendors and the Field Day offices. Also, we should thank Clear Channel and Carl Freed's organization for working with us to keep the stage and infrastructure in-place for the Field Day show. –edited by Jim Lewi jim@liveworksinc.com