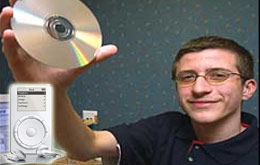 LONDON, England (CelebrityAccess MediaWire) – Apple's plans for a subscription music service from iTunes could be blighted by a hacking attack that took the American electronics giant by storm on Friday.

The attack was alleged to have been led by legendary hacker Jon Johansen, who is credited with illegally cracking the encryption code for software protection of DVDs.

Accoding to Andrew Kantor, there's a fun little back and forth going on between Apple and a group of programmers. Apple runs the iTunes music service, where you can download any of a gazillion songs for a buck or so.
But those songs come with restrictions on where you can play them. So Jon Johansen, Cody Brocious, and crew (Johansen is the Norwegian who cracked the encryption on DVDs several years ago) created PyMusique — software that lets you access iTunes, pay for music, and download it without the built-in digital rights management (DRM) restrictions.

Apple responded by closing the "hole" PyMusique exploited, and requiring all iTunes users to upgrade to the latest version of the software.

Johansen and the PyMusique folks responded by "reopening the door" with a new version. (I am writing this on Wednesday. By the time you read this things may have changed.)

To be fair, the PyMusique group said they weren't interested in stripping the DRM, only in making iTunes available for Linux users. But the restrictions aren't in the songs — they are added by Apple's software. Johansen and crew simply decided not to add that feature.

This could mean somebody swapping songs with a friend or offering the songs for free to millions through filesharing sites.

Although Apple is reported to be moving quickly to try to solve the problem, there may be no quick fix. Ken Chow, a spokesman for US information security company SafeNet, said: "Hacking communities are now so widespread via the internet that once the genie is out of the bottle, it is hard to to undo what has been done. A suitable replacement for much of the DVD encryption hacked into years ago has not yet been widely adopted."

Apple is reported to be planning a subscription service for iTunes to enable users to expand their music collections more rapidly. Instead of buying individual songs, consumers would pay a set fee each month and rent as many as they wanted to. This service would enable them to download thousands at a time.

Any such product is likely to be put on hold until Apple has solved its hacking problem.

The company may be hit by competition, however, in the interim. Online music rivals are introducing subscription services to rival iTunes.

Napster To Go, the most prominent competition for Apple, highlights iTunes' flaws, particularly the fact that building a music collection from scratch would cost hundreds of pounds.

While less money is paid for subscription services, it does have to be paid indefinitely. The songs are rented. If the monthly subscription is not paid, all the downloaded music disappears -unless the files have already been copied with the aid of the illicit hacking software.