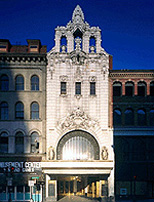 BOSTON (AP) — A Superior Court judge approved plans to revive and expand Boston's Opera House, ending a yearlong dispute between the city and residents of a nearby condominium complex.

Clear Channel Entertainment, the world's largest presenter of live entertainment, plans to proceed with a $30 million development that would extend the 2,500-seat hall onto a neighboring street, and convert it into a major performance center.

The Opera House, modeled on the Paris Opera House, closed in 1991 because Sarah Caldwell and her Opera Company of Boston were behind in mortgage payments, and the city declared the property a public safety hazard. After the building fell into disrepair, Caldwell optioned it to Houston-based Theatre Management Group, now part of Clear Channel, which planned to restore it with the city's help.

Refurbishment plans included expanding onto a street between the Opera House and a neighboring condominium complex.

When plans were announced last year, residents of Tremont on the Common filed a lawsuit, challenging the city's right to take any piece of the street for "private purposes." They say the Opera House expansion would be a nuisance and a safety hazard because delivery and fire trucks would be unable to drive to the back entrance of the condominium complex.

On Monday, Judge Margot Botsford upheld the city's authority to allow the expansion.

Boston Mayor Thomas M. Menino called the ruling "a huge step forward" for preservation and the arts in Boston. The Opera House development is one of four theater revitalization projects in the city.