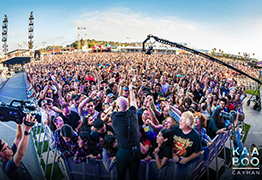 LOS ANGELES (CelebrityAccess) — The Cayman Islands will play host to an expansion of Kaaboo, a music, comedy, art, and culinary festival which has taken place in Los Angeles for the past four years.

The festival, which is slated for Feb. 15-16, 2019, is billed as a posh event aimed at adults who want more in the way of creature comforts than the average music festival can provide.

“They want a sophisticated infrastructure and a range of music from bucket list artists they grew up with to today’s hit-makers on the radio,” Kaaboo founder Mark Felts told Billboard shortly before announcing the Cayman expansion for the festival brand.

Founded in 2015 by Felt in partnership with Richard Branson’s Virgin, Kaaboo has attracted hundreds of thousands of music fans to Los Angeles’s Del Mar Fairgrounds since its debut. However, according to Billboard, the Caymans edition of the event will take place at a purpose-built site near the Kimpton Seafire Hotel on Seven Mile Beach, which is owned by real estate developer John Dart, who is a partner in the Kaaboo Cayman fest.

“It’s an incredible opportunity for us to have a blank canvas and take our experiences and build this as a custom site,” Felts told Billboard.

The lineup for Kaaboo Cayman is expected to be announced on May 15th, but “blind” tickets will go on sale on March 31st for the bold.

“We’re really looking to embrace local talent, local musicians, and local artists. This is about fostering an environment where local artists are going to have a stage before an influential audience and other artists they admire to showcase themselves. We have an extreme focus on hospitality, customer service, and tapping into those five senses of music, art, comedy, culinary and indulgences. In Cayman, we’re calling it, ‘Five senses under the sun.’ This event is going to turn the Caymans into the live entertainment capital of the Caribbean,” Felts added.