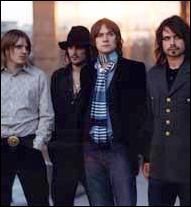 After lead singer Tom Meighan assured the crowd that the show would resume in “two minutes,” a production crew worker hit the stage to inform the audience that the guitarist had sustained a cut on his head and was in need of medical treatment, according to ChartAttack. The rest of the show was cancelled.

“It is unfortunate that the irresponsible, totally unacceptable actions of one individual, who was clearly determined to circumvent every prodecure, rule and precaution, caused inconvenience to our other customers enjoying a fantastic concert by one of the most exciting bands in the world right now,” said David Laing, general manager of the Carling Academy.

Pizzorno did seem to be reasonably good-humored about the incident in a statement, despite the injury.

“After being hit in the forehead with a bottle I was advised by a doctor not to continue the show in Glasgow last night. It is such a shame the actions of one person took the shine off what was an amazing night,” said Pizzorno. “I would like to thank Glasgow fans for all their support. Please throw women’s knickers and bras from now on.”

Despite the six stiches in his head, Pizzorno was able to play the bands second sold-out date on their European tour. –by CelebrityAccess Staff Writers