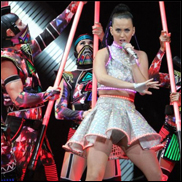 According to news blog Quarts, Perry took to the stage at the Taipei Arena wearing a sequined gown bedecked in sunflowers and wearing a cape that bore a marked resemblance to the flag of The Republic of China, AKA Taiwan. Sunflowers were the primary symbol of the Sunflower Student Movement, a a protest movement that took to the streets for several weeks last year over a trade deal with China that opponents feared would reduce Taiwanese autonomy.

If intentional, this may have been a bold choice for Perry as the Chinese government has proven to be quite sensitive to this sort criticism and filters the internet domestically for mentions of pro-democracy protests. Photos and references to the costume were quickly deleted from Baidu, China's Google, and other social media after the concert, Quartz noted.

"I’m speechless over Fruit Sister (Perry). I suppose she has no chance to come to the mainland anymore, though she might not care. These performers who intervene in other countries’ politics are the most annoying," one disapproving commenter wrote on social media site Sina Weibo.

However, Perry's choice in costumery may merely be an awkward coincidence and as Quarts noted, she has used sunflower iconography repeatedly in past performances in the U.S., including a show in North Carolina where her backup singers were all dressed as sunflowers. – Staff Writers