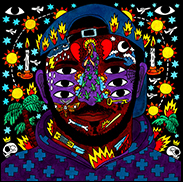 MONTREAL (CelebrityAccess) — Haitian-born, Montreal-bred electronic musician, DJ, and producer Kaytranada has won the 2016 Polaris Music Prize for his debut album 99.9%, besting the nine other albums on the Polaris Short List.

“For me, it’s crazy to get this award,” said Kaytranada. “It’s really, truly, a big honour. It’s amazing. Ceci est pour Montréal, tous mes Montréalais. Shout outs to all of y’all. I want to thank the judges and everybody for voting for me. It’s an honour man, I don’t know what to say.”

Awarded annually, the Polaris Music Prize is intended to recognize the best Canadian album of the year based on “artistic merit without regard to genre, sales history or label affiliation,”

The winner of the award is determined by a Grand Jury of 11 music media professionals drawn from the greater Polaris jury pool of roughly 200 writers, editors, broadcasters, DJs and personalities from across the country.

This year's award was presented during a ceremony held at the historic Carlu in downtown Toronto and hosted by CBC’s Amanda Parris and Tom Power. The evening featured performances by seven of the 10 nominees, including Black Mountain, Basia Bulat, Carly Rae Jepsen, Jessy Lanza, Andy Shauf, White Lung and U.S. Girls. Grimes and Kaytranada were also in attendance. PUP, the other Short List nominated act, were on tour in Europe. – Staff Writers