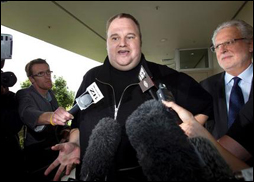 AUCKLAND, NZ (Hypebot) — Kim Dotcom has been attempting to get the music service Megabox off the ground since at least 2011. Last week he resigned his position at Mega director and says he intends to launch the music service, now called Baboom, in a few months. We've heard this before but by now he should know what he's up against.

This year's launch of Mega as a legal file storage and sharing service has opened a new wave of teases regarding a related music service.

Now Dotcom has resigned his directorship of Mega to open the way for upcoming legal battles, possible political activity and the newest new upcoming music service.

Dotcom initially said little about the service saying only that it would not be called Megabox, that 22 developers were working on it and that it would launch in a few months.

Follow up investigation by Torrent Freak led to Dotcom sharing more info, including a teaser featuring Will.i.am, Alicia Keys and Robbie Williams who serve as "placeholders."

Dotcom revealed that the new service will be called Baboom and will be operated by a company owned by Dotcom. He currently has several million in funding.

"I am really excited about Baboom. I can’t wait for artists to see what I have created for them. Their entire career can be managed on Baboom. Artists never had more freedom, transparency and control."

Baboom is expected to have free, ad-supported music as well as an ad-free premium version. The details remain to be seen though his statement that "career[s] can be managed" on the service suggest some interesting possibilities.

Once again we're left waiting to see what Dotcom does next.