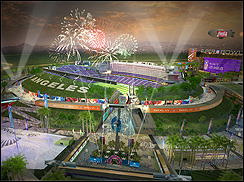 LOS ANGELES (CelebrityAccess MediaWire) — The Los Angeles City Council has signed off on a non-binding agreement with entertainment giant AEG over the development of a stadium that will serve as a home for a yet-to-be-determined NFL football team.

The combined cost for the stadium and planned convention center are estimated to be $1.5 billion, part of which will be defrayed by a $600 million naming rights agreement with Farmers Insurance Group.

Unlike many large sports venues built in the U.S., taxpayers shouldn't be on the hook for the new stadium.

"Farmers Field will be entirely privately funded and the construction of a new state-of-the-industry convention hall, slated to replace the existing West Hall, will be accomplished without cost to the taxpayers," said Timothy J. Leiweke, president and chief executive officer of AEG.

According to financial newspaper The Bond Buyer, AEG will be leasing the land for the new venue from the city at fair market value, adjusted annually for 55 years. Money from the lease will be used to repay $275 million of tax-exempt bonds sold to finance the construction of the convention center.

As for a tenant for the new stadium – that is still a matter of some conjecture. AEG says that they have contacted several prospective National Football League teams, including the San Diego Chargers and the St. Louis Rams, who coincidentally, were formerly the Los Angeles Rams. – CelebrityAccess Staff Writers