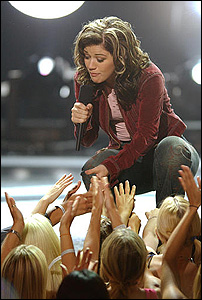 Kelly Clarkson, the winner of Fox TV's "American Idol" has been signed to RCA Records. Clarkson has a contract with Simon Fuller's 19 Recordings Limited, which has licensed her solo effort to RCA Records in America. The first release of the deal, Clarkson's double A-side single, "Before Your Love"/ "A Moment Like This," will hit stores on Sept. 17. Clarkson's full-length major label debut will follow in early 2003.

"We're thrilled to have the opportunity to work with Kelly on her recording career,"
says RCA Music Group Chairman Bob Jamieson. "As we saw on the show, her preserving work ethic and ability to maintain her composure in the most high-pressure of situations — not to mention her stunning voice — showcase what a great talent she truly is."

Artemis Records has signed the Pretenders. The band's new album, Loose Screw, will be released November 12.

Loose Screw is the first album from the Pretenders since 1999's Viva el Amor and the group's 8th studio effort overall. The band's line-up remains the same as it was for the recording of the Viva and Last of the Independents albums.

Produced and mixed by Kevin Bacon and Jonathan Quarmby (Finley Quaye, Ziggy Marley, del Amitri), many of the songs on the album incorporate reggae-tinged rhythms, including the first single, "Complex Person." Chrissie Hynde co-wrote all tracks on the album, except for the cover of "Walk Like A Panther" (a UK hit for DJ collective All Seeing I, co-written and originally sung by Pulp's Jarvis Cocker).

The Pretenders will open for the Rolling Stones on select dates this fall, then return to the U.S. for their own headlining tour in 2003.

The band will also be appearing on Lifetime Television's "Women Rock" concert airing in late October 2002.