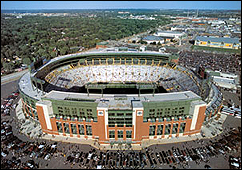 GREEN BAY, WI (CelebrityAccess MediaWire) — A the concert industry gets ready to hit stadiums and arenas across the country for another summer concert season, fans in Green Bay shouldn’t get their hopes up about gracing the legendary turf of Lambeau Field.

The Packer’s playing surface has been ruled out as a concert venue, as the ongoing excavation and installation of a new hybrid field in time for the team’s preseason has taken precedent this year.

The renovated stadium hasn’t hosted a concert in more than 20 years, and the Packers say they’re not looking to get into the music business so long as there is a risk that setup of the mammoth stage productions could damage the legendary field.

“Packers games are the priority,” John Jones, president and COO of the team told the Green Bay Press Gazette. “We love to look at all options and explore them, but the quality of that playing surface for our football team is the single most important consideration.”

The team’s firm stand on protecting the field has become widely known within the concert industry, and music promoters like Live Nation and AEG Live have learned to look elsewhere for major tours like the Rolling Stones, Jimmy Buffett, Kenny Chesney and U2. –by CelebrityAccess Staff Writers