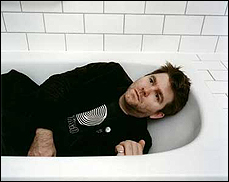 The track, “45:33,” available from the iTunes Music Store, is tailored to be the perfect “jogging mix.” The record is a tie-in to the Nike+iPod Sport Kit technology launched by the shoe company earlier this year.

Reaching #2 on the iTunes “Top Electronic Downloads” for the week of November 14th, the track shows great promise for the company’s planned “Nike Sports Music” section of the online music store.

“The idea of making a long piece of music built around an arc designed for running appealed to me, because it was so anathematic to what you’re typically asked to do as an artists,” Murphy told NME.

“When on tour our band LCD tends to do a lot of running – mainly to keep sane and resist the inevitability of turning into a bus-bound potato, filled with all that makes one sick,” he added.

Murphy explained that he got the blueprint for the new track after friends told him his remixes were good for exercising to.

“When I was approached to make this ‘run’, two different members of the band told me they’d run to two remixes I’d done as DFA – the UNKLE and Gorillaz mixes. Both were long, sprawling, organic dance songs that eased from section to section for 10 plus minutes each,” he said, “so the gauntlet had been thrown down to make something longer that was well designed to reward and push at good intervals of a run.”

LCD Soundsystem is currently working on a new album, set for a March 2007 release. –by CelebrityAccess Staff Writers