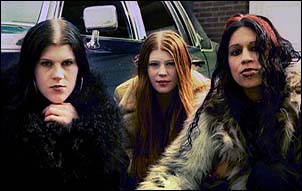 Canadian metal band Kittie and their producer, Garth Richardson, have filed suit against the band's record company, Artemis Records, in the United States District Court for the Southern District of New York, citing numerous counts of breach of contract. The suit filed on March 31 in New York City names Sheridan Square Entertainment, LLC, parent company of Artemis Records, the label to which Kittie is signed, as defendant.

The band and producer made the decision to file the lawsuit after their auditing company, McGladrey & Pullen, reported that the band was owed nearly $900,000 in royalties and other compensation in accordance with the current contract's prescribed accounting methods. Additionally, the audit revealed that Garth is owed over $120,000.

"The band is very disappointed that this process has to take place," said David Lander of K.M.A. Entertainment, Kittie's management company. "This suit should not come as a surprise to Artemis, as Garth and Kittie have been demanding that monies owed be rectified since the audit's completion."

"On behalf of Kittie and their producer Garth Richardson, we look forward to swift court action based on the clear results of the audit," said Charles Joseph, of Joseph & Hertzfeld, the band's litigator.

"It is unfortunate that there still exist cases where a record label can short change its artists," added the band's music attorney, Susan Abramovitch of Goodman and Carr, LLP.

Artemis Records said in a statement: "Artemis loves Kittie's music, respects Garth Richardson's production and is proud of what we have all accomplished together. This is our fourth year in business and we have not previously been involved with any lawsuits, but given the nature of the
business, it was inevitable we would be. At this time we have not seen a complaint, merely read about one on the Internet so we cannot respond except in the most general terms which is to say we are confident that we have done right by Kittie and Richardson."

LOS ANGELES (AP) — A woman who says she gave up her business to become Lou Rawls' mistress sued the soul singer for $12 million, claiming he backed out of a verbal agreement to support her financially even if they split.

Rawls' manager said the lawsuit was frivolous, and that the singer was acquainted with the woman but never dated her.

In the lawsuit filed Thursday, Margaret Schaffer said she met Rawls in Washington state at a Valentine's Day concert in 1998.

After a courtship, when the 67-year-old singer admitted he was married, Schaffer said, she left her job with a fruit-brokerage business and moved into his Southern California home.

They made an oral agreement in November 1998 "to treat as joint property income and earnings," according to the lawsuit. Rawls also agreed to pay her what she would have earned in her job, Schaffer said, adding he promised lifetime support even "in the event their relationship should terminate."

Rawls' manager, David Brokaw, said Thursday night the lawsuit "has no merit." He said Rawls and his wife have lived in his Los Angeles home for 20 years.

"He never moved out of that home to live with Mrs. Schaffer," Brokaw said.

Schaffer said Rawls ended their relationship Jan. 15 and told her never to contact him again and "forget him completely."

The lawsuit seeks $2 million in compensatory damages, $10 million in punitive damages and half the worth of the real estate, stocks and vehicles Schaffer says Rawls bought while they were together.

Rawls, who has won three Grammys, has recorded such hits as "You'll Never Find Another Love Like Mine" and "Love Is A Hurtin' Thing."