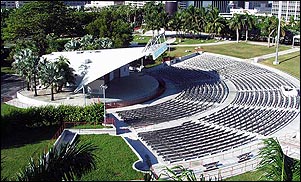 MIAMI, FL (CelebrityAccess MediaWire) — Live Nation has signed a contract, that if approved by the city, will see the promoter handling operations at Miami's Bayfront Park Amphitheater.

The contract would give Live Nation control of the shed for a 10-year stint with two 5-year renewal options. Live Nation would be responsible for upgrading the facility, including a new roof, new seats, upgrades to the stage and adding a concession area, Miami Today reported. The changes in seating, moving from bench seats to stadium seating will reduce the shed's capacity from 10,000 to 6,000.

The city anticipates that the deal will be worth approximately $625,000 a year, with a projected annual increase of 3%. The city will also take a $2 dollar surcharge on each ticket and pocket 10% of any naming deal Live Nation secures for the venue.