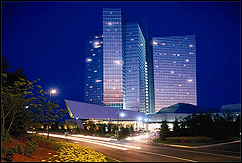 LOS ANGELES (CelebrityAccess MediaWire) — Brian O'Connell, Live Nation's President of Live Nation Country Touring/Nashville, has been named Promoter of the Year by the Academy of Country Music. In addition the Live Nation-operated Nissan Pavilion in Bristow, Virginia was named Venue of the Year, and the Live Nation-booked Mohegan Sun Arena in Uncasville, Connecticut was honored with the top Casino of the Year award today by the 44 year old country music industry organization.

"Year after year under Brian's leadership, our Nashville touring division has promoted the most successful country music tours with the biggest stars in the business and strategically developed exciting new touring stars," said Jason Garner, Chief Executive Officer of North American Music for Live Nation. "Brian is without a doubt the industry expert in national country touring and his hard work is reflected in the other two awards we received today."

The Awards are set to take place on May 18th in Las Vegas at the MGM Grand Garden Arena. CBS will carry a live broadcast of the event. – CelebrityAccess Staff Writers