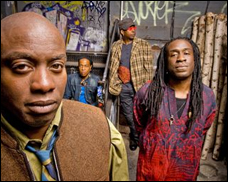 NEW YORK (CelebrityAccess MediaWire) — Living Colour have announced North American tour dates in support of their new album The Chair In The Doorway. The 28-date run will be bookended by performances at The Highline Ballroom in New York City, as they appear August 10 opening for The Roots at their weekly Tuesday night jam session and then again on October 30 for their own headline performance. In between, the band will hit 19 states around the U.S., including a return to The Key Club in Los Angeles on September 24, The Regency Grand Ballroom in San Francisco on September 25 and The Double Door in Chicago on October 4. They'll cross the border for a show in Toronto at Lee's Palace on October 3.

The Chair In The Doorway, set for release September 15 on Megaforce Records, was recorded at Sono Studios just outside of Prague in the Czech Republic. Renowned producer Count (Galactic, Lyrics Born, No Doubt) was onboard to helm the sessions, while Ron St. Germain (U2, Mos Def, Muse) mixed the album. The 11-track collection is Living Colour's most personal collection of songs yet with razor sharp lyrical observations and kinetic jams that seamlessly weave elements of metal, funk and soul. Vernon Reid described the album as, "an unintentional concept record about life and how we are all in this thing together."