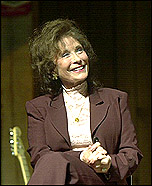 Lynn, who was recently released from the hospital, became ill again during a performance, said Tyson Compton, marketing director for the Paramount.

Lynn's concert was part of the Kentucky Music Trail Series weekly concerts, which has been a huge tourist drawing for the art center and the city.

Compton said employees are calling ticket holders to let them know about the canceled show.

Kathy Timmons, executive director of the Paramount, said the center is working with the singer's management to reschedule her concert as soon as possible.

"We hope to have a date within the next two weeks," she said. "Obviously, we regret the inconvenience to those planning to attend the performance, but we know they join us in wishing Ms. Lynn a quick and complete recovery."

Lynn, a native of Butcher Hollow, is most known for her song "Coal Miner's Daughter," also the title of the autobiography that was made into the hit 1980 movie. The singer-songwriter's career included other hits such as "Don't Come Home A' Drinkin' (With Lovin' on Your Mind)," "You Ain't Woman Enough" and "Fist City."