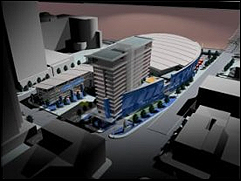 LOUISVILLE, KY (CelebrityAccess MediaWire) — The Louisville Arena Authority is reportedly scheduled to discuss naming rights for the forthcoming downtown arena at a meeting this week.

Last November, officials said the naming rights could generate as much as $40 million over three decades, according to WLKY-32.

The arena project is expected to cost about $252 million.

Jim Host, who heads the Louisville Arena Authority, told the news station that several companies have expressed interest in placing their names on the arena when it opens in 2010. –by CelebrityAccess Staff Writers