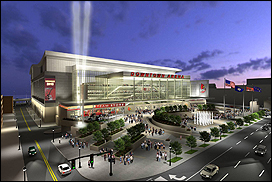 LOUISEVILLE, KY (CelebrityAccess MediaWire) — The new 22,000-seat arena planned for downtown Louisville took another step forward when Louisville Arena Authority closed on a deal for the financing of nearly $350 million in bonds to provide for the construction of the new facility. At completion, the project is projected to cost a total of $249 million.

According to Business First of Louisville, the deal was finally closed on September 3rd after representatives from Goldman Sachs, the bond's senior underwriter, delivered the news that the financing was a go. The finacing package had proven challenging to arrange in the currently frugal credit market and Goldman Sachs vice president Tom Rousakis said that the it took five attempts to assemble a finance package for the bond.

"There was not a lot of appetite for risk in this market," Rousakis said during the meeting. "This is monumental. There are not a lot of projects like this getting done around the country."

Now that financing is in place, work on the arena can get underway with demolition and cleanup at the Main Street location by October with final completion scheduled for November 2010.

The completion of the financing package also opens the door for the Arena Authority to begin weighing naming rights deals. Arena Authority chairman Jim Host told the Business First of Louisville that three companies have already expressed an interest in such an agreement but he was reticent. According to Host, he didn't think that the Arena Authority wouldn't settle for anything shy of $40 million for a naming-rights deal. – CelebrityAccess Staff Writers