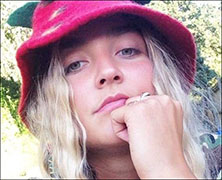 The body of model, actor, and dancer Louella Michie, 25, was found at Bestival early Monday morning after the festival concluded.

According to the Telegraph, a 28-year-old man from London has been arrested on suspicion of murder in connection with the death.

The Telegraph reported that police were alerted just before 1 a.m. on Monday that Michie was missing and her body was discovered a short time later in a nearby wooded area.

Police said they arrested a suspect "to enable officers to conduct an interview under caution to help establish the full circumstances."

Louella Michie was the daughter of British television actor John Michie, who has had roles in the drama series Taggart and Coronotation Street, as well as Casualty and Holby City.

In a statement, Michie's agent told the Telegraph: "Sadly, I can confirm the tragic death of John Michie's daughter, Louella, at Bestival.

"John and his wife Carol ask that the privacy of their family be respected at this traumatic time."

The festival saw attendance of more than 22,000 fans with headliners included the Pet Shop Boys, The XX, and Dizzie Rascal.

A Bestival spokesman said: "The team at Bestival are devastated to hear about this tragic news.

"We continue to support the police in their ongoing investigation and our thoughts and prayers are with all the woman's family and friends."