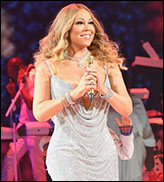 Three South American shows were canceled from Carey’s 2016 tour to the continent, and she blamed promoters in a tweet: “Devastated my shows in Chile, Argentina & Brazil had to be canceled. My fans deserve better than some of these promoters treated them.”

Fenix, also known as FEG Entretenimientos S.A., has field a lawsuit – obtained by The Blast and The Hollywood Reporter – in California federal court against Carey and her company, Mirage Entertainment, that seeks at least $500,000 damages for each of the two missed shows in Chile and Argentina, and seeking at least $2 million in damages for the “knowingly false and defamatory” tweet and subsequent lawsuit.

Carey sued FEG in January 2017 for breach of contract, claiming the promoter didn’t pay her in full by the agreed-upon date and damaged her brand because she was forced to cancel the shows.

Carey is signed to United Talent Agency and Fenix claims in the lawsuit that it has had a long history with UTA and always has paid in full for its artists’ performances. Carey was expected to perform in Argentina Oct. 28, 2016, and in Chili Oct. 30. Fenix claims it had paid about 75 percent of the balance when the singer canceled (which the promoter says it learned of through the media), but Fenix claims that, according to the language of the contract, the singer was required to give Fenix 48 hours to fix any failure to adhere to the agreement before terminating it.

Fenix claims that the contracts did not have language that “’time is of the essence’ or any similar wording indicating that failure to substantially comply would result in termination of the Agreement.”