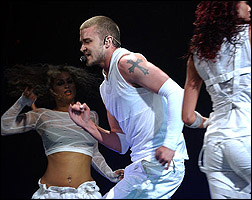 (CelebrityAccess News Service) – McDonald's plans to sponsor the 35-city Justin Timberlake 2003 European tour, which kicks off in November in Germany, and is making Timberlake part of its new marketing appeal to today's customers, culture and lifestyles. The Golden Arches and Timberlake have entered into a multi-tiered international partnership with the performer tied to McDonald's unprecedented worldwide brand campaign, "i'm lovin' it," launching in more than 100 countries beginning this month.

"Justin Timberlake is perfect for the McDonald's brand and our 'i'm lovin' it' campaign, which is all about connecting with our customers in fresh, modern, relevant ways," said Larry Light, McDonald's executive vice president and global chief marketing officer. "As one of music's hottest young stars, Justin Timberlake is absolutely connected to today's consumer attitudes and trends. His cultural relevance is right in tune with McDonald's new direction."

Timberlake will record the vocals for several of McDonald's new "i'm lovin' it" commercials and appear in cameo roles throughout the new campaign. "I love what McDonald's is doing with this new campaign, and it's cool to be part of it," said Timberlake. "We share the same crowd — people who like to have fun — and that's what this new partnership is all about."

McDonald's will work with Timberlake to develop new and innovative ways to reach and connect with today's young customers and today's pop culture. In addition, he will be involved in activities to support Ronald McDonald House Charities, World Children's Day at McDonald's worldwide fundraiser on November 20th, and McDonald's global sports sponsorships including FIFA World Cup and the Olympic Games. –by Bob Grossweiner and Jane Cohen