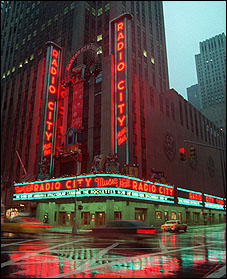 "I am pleased to welcome Melissa as the new EVP Bookings for Radio City Entertainment. Melissa's 17 year career in the concert industry is certain to bring a diversity of experience and talent to our venues," said Jay Marciano, president, Radio City Entertainment. "I have been honored to work with Melissa in the past and I am confident she will lead our booking efforts to ensure that we continue to showcase the kind of historic, diverse events that Madison Square Garden and Radio City are renowned for around the world."

"The opportunity to work with Jay at two of the most legendary venues in the business — Madison Square Garden and Radio City Music Hall — was an opportunity that I could not pass up," said Ms. Ormond. "I am thrilled to have an opportunity to contribute to creating more of the kind of history-making events for which both venues are known."

Ms. Ormond's career in the concert industry spans 17 years, with experience at all levels of the business. In 1987, she began working at the 9:30 Club, Washington, D.C.'s premier alternative music nightclub. Shortly after, she was promoted to General Manager of the club, while simultaneously holding the position of Production Manager for the concert promotion firm, I.M.P., Inc. I.M.P. promoted concerts in venues ranging in size from 1500 seats to 20,000 seats.

In 1991, she moved to New York City to become Vice President, Talent for Delsener/Slater Enterprises where she exclusively booked shows at both Roseland Ballroom and Irving Plaza.

In 1995, Ms. Ormond moved to Los Angeles as Vice President, Talent for MCA Concerts. In that position she booked alternative and modern rock concerts at Universal Amphitheatre. Promoted to Senior Vice President, Talent for the company, then named Universal Concerts, her position expanded into booking those concerts for three of the company's 20,000 capacity outdoor amphitheaters in Atlanta, Dallas and Cleveland.

In 1997, she helped Universal Concerts become the national tour promoter for Lilith Fair, the highly successful and critically acclaimed touring festival for female artists created by Sarah McLachlan. In 1999, with the opening of Coors Amphitheatre in San Diego and the acquisition of Bill Silva Presents, she oversaw the booking portion of the entire San Diego region for Universal including the Coors Amphitheatre, Cox Arena, and the Open Air Theatre at San Diego State University.

After the sale of Universal Concerts to House of Blues Entertainment, Ms. Ormond maintained her existing responsibilities while expanding further into national touring. She negotiated and over saw a 50-city national tour for blink-182 in 1999-2000, which saw the band grow from a ballroom-sized act to a band that sold out amphitheaters across North America. In 2002, in conjunction with John Scher's Metropolitan Entertainment, she promoted the national tour for Down From the Mountain, Music from the movie O' Brother Where Art Thou?

Ms. Ormond most recently relocated from Ireland to New York where she currently lives with her husband.