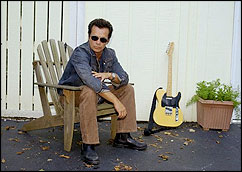 (CelebrityAccess MediaWire) — After three years off the road, John Mellencamp launches his North American tour on March 23 at Savannah Civic Center in Georgia. Dubbed the Words & Music Tour, after his recent 2 CD Greatest Hits, the tour’s first leg runs through April with Donovan as a special guest, who will also join Mellencamp for a special onstage collaboration.

"Going out and playing is a great way for me to keep these songs alive; it's what I've done for my whole professional life,” said Mellencamp. “I do my best to give the audience the best possible performance and I've got the greatest band in the business backing me up. We're keeping the ticket prices down so as not to exclude anybody who might want to attend one of these shows."

The top ticket price for the current set of dates is $45; the average ticket price will range between $25 and $35.

Members of the official John Mellencamp fan club, Club Cherry Bomb, (www.clubcherrybomb.net and www.JohnMellencamp.com) will be offered access to premium concert tickets via a presale available through the site.