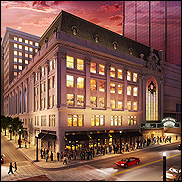 KANSAS CITY, Mo. (CelebrityAccess MediaWire) — AEG announced their plans to re-open the Midland Theatre on September 9th , marking the occasion with a concert by Melissa Etheridge.

"The Midland is a gem among historic theatres, not only in Kansas City, but across the country," said Joe Litvag, senior vice president, Midwest region at AEG LIVE. "Much like in its heyday, it will again host today's top musical touring acts, comedy shows, family shows and special events through creative and flexible programming."

Located in downtown Kansas City on Main Street in the Power & Light District, the original Midland theatre opened in 1927 and hosted well-known artists throughout its history, most recently, Faith Hill, Bob Dylan, James Taylor, Willie Nelson, Duran Duran, The Moody Blues, Jerry Seinfeld, Michael Buble and Jethro Tull. Upon its re-opening in September, the Midland will be home to a wide variety of musical artists, comedians and family entertainers as well as special, corporate and private events.

Among the upgrades made to the historic building during the refurb were state-of-the-art sound, lighting and amenities. The theatre can handle flexible seating arrangments from full dining to general admission standing. The loge has been upgraded withstadium seating and new VIP boxes that will include wait service.

Two bars have also been added to the mix at the theatre. The Chandelier Bar on the top floor will feature cabaret style seating, and be available through Ticketmaster for every show. Another, music-centric bar, Indie on Main will feature a full bar and be open to the public.

AEG also announced naming rights for the theatre with movie theater operators AMC being coming on as the naming rights partner. "For more than 40 years, we have cared for the Midland, first operating it as a movie theatre and for the past 20 years as a live entertainment theatre," said Frank Rash, senior vice president, strategic development and marketing, AMC.

The initial fall lineup at the theatre includes: