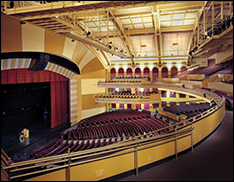 MILWAUKEE, WI (CelebrityAccess) — The Milwaukee Theatre, long a fixture in the city's live entertainment scene, will be renamed Miller High Life Theatre as part of a new naming rights deal with brewer MillerCoors.

According to the Milwaukee BizTimes, the MillerCoors signed a 5-year naming rights deal with the 108-year-old theater which will give the district $350,000 per year, or $1.75 million over the terms of the agreement.

To implement the new deal, Wisconsin Center District has filed an application to construct two free-standing signs to tout the venue's new moniker. As well, the deal grants exclusive advertising for malt beverages within the 4,100-seat theater, BizTimes said.

Originally known as the Milwaukee Auditorium, the venue has hosted events ranging from concerts, circuses, to political rallies and sports events. Former U.S. President Theodore Roosevelt delivered a speech at the auditorium just minutes after an assassination attempt that left him with a bullet embedded in his chest.