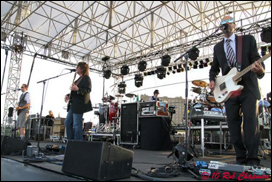 PORTLAND, ME (CelebrityAccess MediaWire) — moe. will take the stage on October 16th to celebrate the grand opening of the State Theatre in Portland, Maine.

Derived from modest beginnings in a Buffalo basement, 2010 marks the twentieth anniversary of moe.’s frontline of Rob Derhak (bass, vocals), Chuck Garvey (guitar, vocals), and Al Schnier (guitar, keyboards, vocals), who continue to perform together with the addition of drummer Vinnie Amico and percussionist and multi-instrumentalist Jim Loughlin.

The performance by moe. is included in a series of concerts reopening the theatre, which has been closed since early 2006.

In May, New York City’s The Bowery Presents and Alex Crothers of Higher Ground Presents, signed a deal to reopen the State Theatre.

Lauren Wayne, a music-industry veteran and Portland local, will serve as general manager and will lead the charge in booking.

On October 17th, the venue will celebrate it’s reopening with a free concert and open house event featuring performances from local bands Darien Brahms, Jacob and the House of Fire, Brenda, Sidecar Radio, Atomik, and Grand Hotel, among others.

This open house will also serve as the annual launch event and membership drive for local non-profit organization, Portland Music Foundation (PMF). The foundation aims to “educate, inspire, and incite musicians and music professionals throughout the Portland area and help the entire local music industry grow and prosper,” according to the State Theatre’s site. –by CelebrityAccess Staff Writers