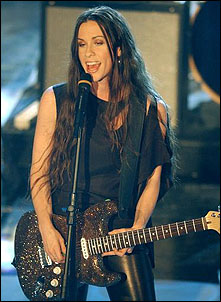 NEW YORK (AP) — Alanis Morissette has swept away the competition, debuting at the top spot with "Under Rug Swept".

Grammy winners also got a bump in sales after last week's awards. The "O Brother, Where Art Thou?" soundtrack, which won five awards including album of the year, jumped from No. 15 last week to No. 2, selling more than 200,000. The bluegrass and folk compilation has gone quadruple platinum.

Alicia Keys, who won five Grammys including song of the year for "Fallin'," moved from the 20th spot to No. 4. Her debut album, "Songs in A Minor," which won the R&B album Grammy, sold nearly 103,000 this week. It's also gone quadruple platinum, selling 4.7 million copies.