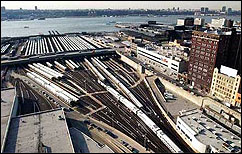 Madison Square Garden (MSG) unveiled its proposal on March 21 for transforming the West Side Rail Yards in Midtown Manhattan into a vibrant, multi-faceted neighborhood that addresses the vital needs of the community, while offering city residents the opportunity to enjoy the site's proximity to the Hudson River with free parks and a water-side promenade. MSG outlined a comprehensive development plan for the 13-acre Hudson Rail Yards that was submitted to the Metropolitan Transportation Authority (MTA) as part of MSG's proposal to purchase the air rights and build a platform for development over the rail yards.

Cablevision, which owns Madison Square Garden, bid reportedly in excess of $600 million. The New York Jets bid $720 million while TransGas Energy Systems bid more than $1 billion. Two other bids were submitted, but since they did not include the required $25,000 application fee, they were immediately rejected. Each bid is quite complex, but the winner does not necessarily have to be the highest monetary bidder. It is a political hot bed with a potential stadium receiving the 2010 NFL Super Bowl and being the main venue for a 2012 Olympics.

"We have created a development plan that truly addresses the needs of the community by providing essential and affordable housing, spectacular open parks, and space for a much-needed elementary school and a library," said Madison Square Garden's Vice Chairman Hank Ratner. "MSG's plan also gives hundreds of millions of dollars to the MTA, generates enormous direct and indirect tax benefits for the City and eliminates the possibility of New York taxpayers paying more than $1 billion in public subsidies. We have in place an expert team and the financing we need to begin this effort immediately."

MSG has worked closely with neighborhood leaders to develop its plan, which features a number of special projects specifically designed to improve and enhance the local community. They include:

The benefits of MSG's bid and development plan are significant: