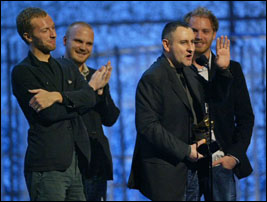 MTV Live – Coldplay will premiere as a 60-minute concert on MTV channels around the world on June 5, the night before X&Y is released internationally. The show will be taped next month in a secret venue in London and will feature songs off the new album, including the single 'Speed of Sound,' along with classic Coldplay tracks. In addition, MTV will broadcast a new 30-minute special, All Eyes on Coldplay, where leading artists ask the band questions about the making of X&Y and their forthcoming world tour.

Twenty of MTV's international channels will also run an exclusive competition on-air and online to give fans the chance to win a trip to London to attend an intimate Coldplay gig taped by MTV next month.

"Through our network of local channels and Web sites, we are uniquely positioned to offer MTV audiences around the world exclusive access to the world's biggest artists," said Jesus Lara, vice president, Music Marketing & Talent/Artist Relations, MTV Networks International. "We are excited to support Coldplay and X&Y, which will be one of the year's most acclaimed releases, as well as to partner with EMI and Parlophone to enable MTV viewers from around the world the chance see the band up close and personal before the album hits stores.

"I am very excited to collaborate with MTV on this unprecedented opportunity for Coldplay to play songs from their terrific new album X&Y to a world-wide TV audience on the eve of its release," said Kevin Brown, vice president International, EMI UK. "Coldplay are a global act and MTV provides a valuable multi-media platform for them. This international competition and new Coldplay programming will ensure that fans from around the world get to experience X&Y live prior to the album's release.

"It's really cool that fans are flying in from all over the world to see us play for MTV in London next month," said Coldplay singer/guitarist/keyboardist Chris Martin. "We'll try and make it worth their effort!

"We can't wait to play songs from X&Y to our fans, and the MTV audience will be among the first to hear them," said Will Champion, Coldplay's drummer. "We wish everyone the best of luck in the competition. –Jane Cohen and Bob Grossweiner