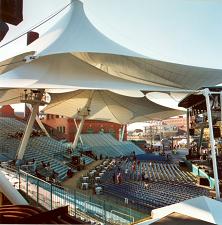 House of Blues Concerts and Scene Magazine, an Ohio entertainment publication, have
agreed to a naming rights deal to change the 4,800-capacity Nautica Pavilion to Scene
Pavilion. Last year the amphitheater underwent a $5 million renovation.

But a war might be brewing. Competitor Clear Channel Entertainment books the Tower
City Amphitheater. The Cleveland Plain Dealer reports, "Michael Belkin is on a mission," said
a concert club owner who got a call from the Clear Channel executive last week. "He's telling
everybody what he's going to do. He's threatening to pull his ads."