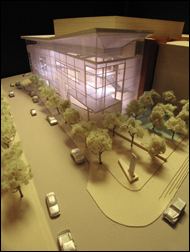 NEW YORK (CelebrityAccess MediaWire) — The Nederlander Organization, the owner and operator of several venues and theatre productions, has announced that it has been selected to exclusively manage operations, programming and bookings at the Durham Performing Arts Center in North Carolina in partnership with Professional Facilities Management, Inc. (PFM). With over 30 Broadway theaters in New York and across the U.S., this prestigious partnership promises an authentic entertainment experience that will be unmatched in the Southeast.

The Durham Performing Arts Center is a 2,800 seat multi-use theater currently under construction in Durham, North Carolina in the American Tobacco Historic District, adjacent to the Durham Bulls Athletic Park. Spearheaded by the City of Durham, the $44 million facility is the creation of Chapel Hill architectural firm Szostak Design and Dallas-based developer Garfield-Traub. Scheduled for completion by December 2008, the venue will soon become the largest of its kind in the Carolinas and will feature top Broadway performances, concerts, family shows and other events. The inaugural season of Broadway Carolina for 2008 / 2009 already features world-class theatre productions including Rent, Fiddler on the Roof, Legally Blonde The Musical and Oprah Winfreyâ€™s The Color Purple.

This spectacular cultural landmark will draw audiences from around the state to more than 100 shows each year. Specifically designed to present the biggest shows on tour, the venue boasts incredible sightlines with no seat more than 135 feet from the stage, as well as spacious seating, state-of-the-art sound and lighting, and convenient parking.

â€œThis region is growing at a rapid pace and with the launch of Broadway Carolina, the Durham Performing Arts Center is going to be a special place for exclusive performances,â€ said Nick Scandalios, Executive Vice President of the Nederlander Organization.

Additionally, the Nederlander Organization and PFM have appointed industry veterans Bob Klaus as general manager and Kelly Milukas of PFM to book the venue. For nine years, Klaus was the general manager of Walnut Creek Amphitheatre, formerly known as Alltel Pavilion. With Klaus at the helm, Alltel Pavilion had the highest guest rating among the 32 largest amphitheaters in the country. Milukas has booked multiple venues for PFM over the past nine years and serves as the Director of Concerts, where she is the talent buyer for concerts, comedy, dance, classical, and family events. –by CelebrityAccess Staff Writers