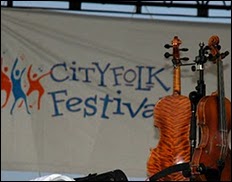 Jerry Brunswick, president of Cityfolk’s board, said Alter’s strong skills in fundraising, management and large-scale event planning will help Cityfolk “become an even more integral and sustainable part of the Dayton region, and its vibrant arts and entertainment scene," according to the Dayton Daily News.

Alter replaces John Harris, who is credited with stabilizing and steering the folk arts-presenting organization through hard times over seven years. Harris announced his departure in January but remained as executive director through the 2010 Cityfolk Festival in July.

The Cityfolk Festival, a free three-day event that started in 1996, announced that this year could be its last because of $140,000 in lost corporate sponsorships, according to the Dayton Daily News.

Cityfolk launched a Friends of the Festival fundraising campaign this year to help make up the shortfall created by the decline in corporate donations.

Cityfolk received the 2009 Governor’s Award for the Arts in Community Development and Participation. –by CelebrityAccess Staff Writers