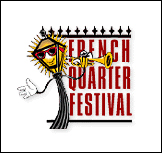 (CelebrityAccess MediaWire) — New Orleans is poised to host its first major music festival post-Hurricane Katrina, The 23rd Annual French Quarter Festival to be held April 21-23. The event has been the largest, free music festival in the country, attracting a record 450,000 attendees in each of the last two years.

"Coming on the heels of a successful Mardi Gras, the beloved French Quarter Festival gives travelers yet another reason to come back to New Orleans and celebrate the city's unique and wonderful culture," says Sandra S. Shilstone, president and CEO of the New Orleans Tourism Marketing Corporation. "As New Orleans continues its post- Katrina recovery, the best way people can help us help ourselves is by visiting."

Jazz at Lincoln Center is hosting an outdoor concert at Congo Square in Louis Armstrong Park on April 23 performed by the Jazz at Lincoln Center Orchestra featuring Wynton Marsalis. The free performance, which begins at 1:15 p.m. at the park, will be preceded by a second line parade that begins at noon at the Backstreet Cultural Museum, located at 1116 St. Claude Avenue in Treme.

The 10th Annual New Orleans International Music Colloquium, which includes scholarly presentations, films, interviews, and music performances. "French Quarter Festival is an opportunity for visitors to come experience the best that New Orleans has to offer," says Jon Stern, president of the FQFI Board of Directors. "We have some of the best indigenous musical talent in the world, and people who visit will be supporting the city and many of its great musicians."

As in prior years, the annual event kicks off April 20, at the T.G.I.F. (Thank Goodness It's Festival) fundraising party at Jimmy Buffett's Margaritaville. New Orleans' own Deacon John & the Ivories will perform; the party is 7-10 p.m.

The festival officially begins on April 21 at 10 a.m. with a second-line parade featuring the Hurricane Brass Band starting in the 100 block of Bourbon Street. The parade concludes at Jackson Square with an opening ceremony and music performed by the French Quarter Festival All-Stars featuring Connie Jones. –Bob Grossweiner and Jane Cohen