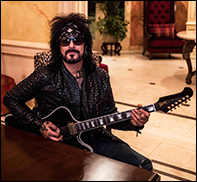 "I grew up discovering music on the radio," said Nikki Sixx. "So to host my own show over the nearly eight years of Sixx Sense was beyond my wildest dreams. I could not have done it without my amazing team in the studio, or the guests, musicians, and listeners that brought the show to life. It's been an inspirational journey and I'll always be a fan of the medium, but it's time to shift gears outside the realm of solely radio. I'm in the process of developing new and unique programming and ventures across multiple platforms. But I'm really gonna miss Sixx Sense."

Sixx says his exit from his radio gig is intended to allow him to focus on new endeavors in 2018, including photography, as well as television projects and the Broadway adaption of his memoir "The Heroin Diaries: A Year In The Life of a Shattered Rockstar."

Launched at the beginning of 2010, his flagship radio program Sixx Sense quickly proved to be a hit and became the biggest syndicated rock show in the US, carried by more than 130 stations nationwide and boasting nearly 3 Million global weekly listeners.

During his tenure as voice of the show, Sixx has interviewed rock luminaries such as Sir Paul McCartney, Slash, Steven Tyler, Metallica, Stevie Nicks, and Dolly Parton, as well as other public figures, including, boxing champion Mike Tyson, director Cameron Crowe, celebrity health 'expert' and purveyor of patent medicines Dr. Oz, among others.