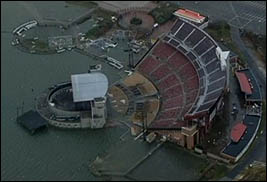 WANTAGH, NY (CelebrityAccess MediaWire) — After cleaning up the damage from severe flooding in the wake of Hurricane Sandy last fall, Live Nation has announced that the Nikon at Jones Beach Theater in Long Island has reopened for business.

Along with much of the coastal regions throughout New York and New Jersey, Hurricane Sandy inflicted catastrophic damage on the Nikon, with the storm surge leaving more than 3 million gallons of seawater to be pumped from the venue. Repairs to the Nikon cost more than $20 Million and addressed damage to seating, the stage, and VIP areas, as well as backstage and concession facilities.

The stage and boardwalk and their substructures had to be completely rebuilt from scratch. More than 9 miles of special MCM cable had to be replaced in the tunnels and access ways below the venue. All the doors on the main level, more than 200 in total, had to be replaced. Where possible the venue's infrastructure was redesigned to mitigate any future damages (i.e. the main electrical system was relocated to the second floor, above the 100 year floodplain) and replacement appliances and equipment were upgraded to energy efficient models.

"It was a priority for Live Nation to work quickly to return this historic venue to working order," said Michael Rapino, CEO and President of Live Nation Entertainment. "Of course it was important to the artists who love to play at Jones Beach every summer and to the thousands of fans that come to a concert there. But it was also vital for the local community and the hundreds of employees who work at Jones Beach – so we actually started preparing for the potential clean-up and reconstruction efforts before the storm even arrived. It's a testament to the single-mindedness and dedication of the entire reconstruction team that we were able to put Jones Beach back together in time for this summer's great lineup of shows."

The venue is now set to re-open with a May 31st concert by country legend Rascal Flatts.

The full summer schedule for the Nikon at Jones Beach.

•September 7 The Allman Brothers Band, Grace Potter and the Nocturnals