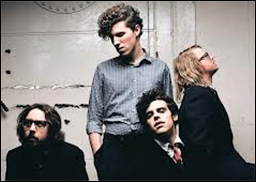 The announcement was made to fans yesterday (April 1). The group released their debut album `Peaceful, The World Lays Me Down` in 2007 and went on to release three more albums, `The First Days Of Spring`, `Last Night On Earth` and final album `Heart Of Nowehere` in 2013. `Last Night On Earth` was certified Platinum in the UK and featured the single `L.I.F.E.G.O.E.S.O.N.`

A message from the band announcing the split sees the band describe the past eight years as "incredible" and adds that they are "immensely grateful to everyone who has helped us along the way."

"There are too many people to mention in this short message but we would like to take this opportunity to give special thanks to all of our amazing fans, who have supported us so magnificently over the years and made everything possible," the message reads. Frontman Charlie Fink has recently launched his own website and shared pictures from the recording studio on Instagram.

His bandmates are also pursuing music following the end of the band with violinist Tom Hebden touring with Mumford and Sons and drummer Michael Petulla involved in several other projects with fellow London musicians. Matt Owens, meanwhile, will release solo album `Songs For An Empty Room` while guitarist Fred Abbott has announced his own solo album, `Serious Poke`.