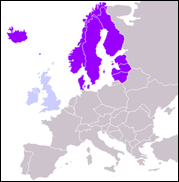 STOCKHOLM, Sweden (Hypebot) – I'm not entirely sure why, but it appears that a bunch of folks in the northern parts of Europe are doing some rather interesting analysis of the recording industry in that region. Perhaps it's the fact that so much attention has been placed on those regions thanks to file sharing services like The Pirate Bay and Mininova (both based there), but either way, we keep seeing studies from such countries that seem worth talking about. Last month, it was a detailed and fascinating study on file sharing in the Netherlands, which suggested (again) that it was a business model issue rather than a legal one, and now a bunch of folks have sent in a study from Norway claiming that those who download are much more likely to buy music than those who don't. We've seen analogous studies saying similar things in the past, so this is no surprise.

Separately, a couple weeks ago someone sent in a long but fascinating study from Finland on the history of two of the more successful record labels (pdf) in that country. The key finding shouldn't be all that surprising. Both record labels were more successful when they focused not on how to make the most money, but on experimenting with new business models and embracing the music for the sake of the art, rather than solely as a business proposition. This is a point that often seems to get lost in these discussions. If you focus on doing something you love, the opportunities to make money tend to provide themselves. If you focus just on making money, you often find that you hate what you do… and the money isn't as readily available. – Guest post by Mike Masnick reprinted with permission from Techdirt.