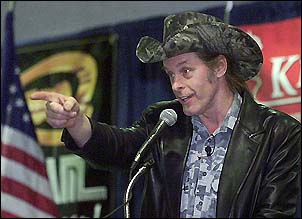 Ted Nugent has sued a Muskegon, MI concert promoter in Jackson County Circuit Court after being dropped from a 2003 Summer Celebration June 30 concert at Heritage Landing
for making alleged racial slurs made in a Denver radio interview. He denies making racial slurs and alleges his reputation was damaged. Nugent and his manager Doug Banker are suing for breach of contract, libel and slander, unfair competition and unjust enrichment. He is seeking damages, court costs and legal fees. Nugent filed a similar suit in federal court in Grand Rapids, MI but it was dismissed since it was not a federal matter.

Ted Nugent and the Amboy Dukes were booked for the show at $80,000, according to the Jackson Citizen Patriot.

In the May 5, 2003 radio show Nugent allegedly used racial slurs for Asians and blacks, and the interview was cut off at that point. In the lawsuit,
Nugent denied making the remarks and alleges the concert promoters relied on "third-hand hearsay" to defame him in public announcements.

"In a world of political correctness, there is no more reputation-destroying term than racist," Nugent said last summer. Nugent also claims that his name was not taken off the promotion for the show with the Allman Brothers Band, Boston, LL Cool J, The Commodores and other groups. Pat Benetar eventually replaced Nugent on the bill.

Nugent claims the promoters made false statements "to hold plaintiffs up to public scorn, ridicule and embarrassment in their business operations."

The promoters Achterhoff and Austin claim they did not break a contract, but "withdrew the offer to invite Ted Nugent to perform" amid controversy over the Denver radio interview. –Bob Grossweiner and Jane Cohen