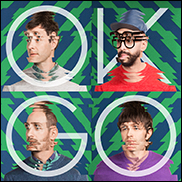 Directed by OK Go frontman Damian Kulash, Jr. and Yusuke Tanaka, with the support of the paper manufacturer, Double A, the video was shot in Japan over the course of two years using 567 printers and a lot of paper.

"This song is about how our most intense and complicated emotions are also our simplest and most universal. Obsession is so overwhelming and perplexing, but it's also so binary and basic – everything's normal and then suddenly it's not," said Kulash, Jr. "For the video, we wanted that same idea: take the simplest thing and just revel in how powerful and not-simple it really is. And animation is that – it's just one picture on one piece of paper, then another, and then another, and somehow that progression turns into a whole universe. So we tried to create the physical version of that universe, a room where the walls can change into anything you imagine, but everything is made of just one piece of paper following the last."

"And what a pleasure it was to collaborate with this team. Working with Yusuke was incredible, and we've been wide-eyed fanboys of Rizomatiks and Elevenplay (and Daito and Mikiko) for years, so this was a real dream come true. We learned, again, that the simplest ideas are always the hardest, and this team made miracles happen. We're so thankful that Double A gave us this opportunity, not to mention the paper that inspired the whole thing!" Kulash, Jr. added.

While the album originally dropped in 2012, the new video, which has already racked up more than 6 million views, is part of the band's promotional effort for their forthcoming tour, which the band unveiled with an interactive live show earlier this month. OK Go performed their songs live and in sync with 20 of their music videos, and paused for questions and answers with the audience.

Upcoming live dates for said tour will be announced soon.