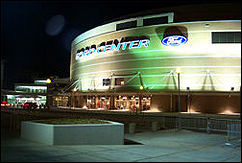 OKLAHOMA CITY (CelebrityAccess MediaWire) — The final fate of a deal to refurb the Ford Center now rests in the hands of voters, who will be asked to cast ballots on March 4th over a proposed 1 cent per dollar sales tax, the proceeds of which would fund proposed $120 million dollar upgrades to the Center. Supporters of the initiative, which is scheduled for vote a few weeks before a proposed meeting of NBA owners, hope that the facility upgrades will prove sufficient to lure a franchise.

"Having the NBA here is a real plus for Oklahoma City," Ward 6 Councilwoman Ann Simank said. "And we have a chance to jump on the wagon and make this a first-class, upper-tier city. We have seen it happen over and over, and I don't think we can afford to stop now. The momentum must go on."

Simank's enthusiasm isn't shared amongst all Oklahoma City residents however and some have raised issue with the notion of publicly subsidizing construction costs for a private enterprise.

"It's a tax that affects those working people more than those people who can afford the seats." said resident Ed Holzberger during the council meeting. Holzberger described himself as living "2 miles and 2 billion dollars" from Supersonics chair Clay Bennett, the Norman Transcript reported.

The tax is planned to last for 12 months but some versions of the proposal would extend it to 15 months, to support the construction of a $20 million dollar practice field.

If a team did move to Oklahoma City, it would like be the Seattle Supersonics, who have been of late engaged in a very public skirmish with the city of Seattle over their lease deal. Additionally, the team was sold in 2006 to Oklahoma businessman Clay Bennett for $350 million. Bennett has stated that he would like to move the team to Oklahoma City. – CelebrityAccess Staff Writers