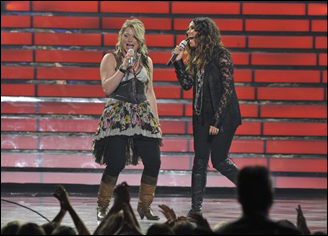 What did you expect, it's television! Do you really think they're going to waste time focusing on the cardboard contestants? No, they coronated the true star, Simon.

Not that it was satisfying.

The reason network TV is a shadow of its former self is because it's trying to be all things to all people. Is there really someone out there who watched this show and felt warm all over? Music is inherently niche, not broad, it's too edgy to appeal to all.

But the oldsters who gripped the mic were horrifying. They missed notes, appeared aged and looked like they were at some low rent audition, begging for future gigs. I was into Hall & Oates, they played the zippy, yet still surprising, "You Make My Dreams"…but although I was rooting for him, Daryl Hall ultimately faltered, the song would have worked in a club, but on live TV, in a cavernous hall, we could not forgive the lack of perfection.

Alice Cooper was outsung by the contestants.

Michael McDonald should have canceled, there was something wrong with his voice.

As for Chicago, the city should revoke the use of its moniker.

And then there was Alanis…

Crystal Bowersox is singing "Ironic"… How many times did we watch that video on MTV? And then the song changes, and from the wings we hear…

"I want you to know"

And my heart skipped a beat.

You oughta know that song, Alanis's initial hit, was not written by committee, hacks in a back room, but her. And, as a result, it cut to the bone.

"You seem very well, things look peaceful I'm not quite as well, I thought you should know"

Ever been dumped? I'd say it hurts, but it's worse than that. You didn't see it coming, sometimes you don't even have a premonition. Yesterday you were lovers in your own cinematic vignette, now you're broken down and busted on the side of the road.

And you never really recover. You grow a rhino skin. You learn to cope. But you never quite trust the same way again, you're suspicious. Most regain hope. Some never do. They soldier on silently, alone, forever. They don't want to risk being hurt again.

Your friends are sick of hearing the story. Then along comes a twenty one year old woman telling your story. With all the anger and frustration you feel inside. And you can't stop listening.

"And I'm here to remind you

Of the mess you left when you went away

It's not fair to deny me

Of the cross I bear that you gave to me

You, you, you oughta know"

You finally get to the point where you speak your truth. Previously, whenever they called you were nice, you didn't want to drive them away, you still had a kernel of hope…that they'd come back.

But they never do. They cry too. But they're done, they're gone.

Tommy Mottola left a mess. And Clive Davis did too. They no longer believed in the soul of classic rock, they no longer wanted to give the artists that much control, they wanted to bring in the usual suspects, create safe salable music.

And then we had the faux divas. The Mariah Careys. The melisma multitude. To the point where young people today think that's talent. To trill up and down the scale and blow the house down.

Talent can be about a great voice, but that's at best part of the package. Great art comes from deep inside, from personal experience, from the soul. It's not made by hacks on holiday, but people who've slaved for 10,000 hours, because they truly cannot do anything else.

Alanis was the only artist who hit every note, who sang with power, who delivered her classic song. Yes, Carrie Underwood sang pretty well, but if you think she's an artist, I want to buy you a dictionary.

Yes, the National is better than anything on "American Idol". The Hold Steady too. They're speaking their truth. But once upon a time, the best and the brightest were vying to tell their truth in song, to the point where the acme was stratospheric, the quality of material was staggering, we couldn't help but bow at the altar, we needed to own the music and go to the show.

Yes, Alanis collaborated on that record with Glen Ballard. Yes, she's never come close to following it up, except maybe for that great soundtrack song "Uninvited". But in the midnineties, music and marketing met. Alanis was so good, and the power of the media so great, that she became the biggest star on the planet overnight. It's amazing she's still alive, that she didn't O.D., that she can live a somewhat normal life.

Because it's tough to have that spotlight upon you.

It's one thing if that's the only thing you're providing, an appearance when everybody is paying attention, like glam-boy Ryan Seacrest. That's a skill, but not much of a talent. The real talent is developed in the back room when nobody is watching, when you encapsulate all your hopes and dreams in one three minute song, hoping and praying that you connect.

Nobody else on this show came close. Certainly not the wannabes. And even though almost all of the oldsters had their moments, they were running on fumes, clinging to what once was, praying that we suspend disbelief. Alanis triumphed in the present.