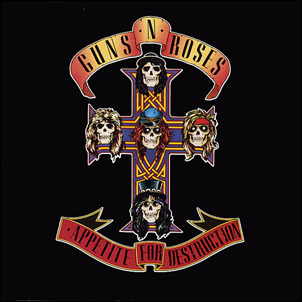 Nobody wanted the album.


This is not a story of oppressed rock star sticks it to the man, this is a tale about an insane performer who's alienated not only his entire band, but every producer and manager he's ever worked with. By arguing over less than two million dollars, a couple of nights on the road, does Axl end up looking like he's got balls or that he should be committed to an insane asylum?


Let's just say Irving did everything Axl alleges. It's possible. You hear these stories in rock and roll. Are people gonna side with the diminutive businessman or the corn-rowed performer who got plastic surgery to close the VMAs?


Guns N' Roses put out one of the best hard rock albums of all time. "Appetite For Destruction" sold and sold, was featured in videos and still gets airplay today. Sure, the hit was "Sweet Child O' Mine", but come on, wasn't that riff in "Paradise City" amazing? The track built to a frenzy, driving you nuts. And when you heard "Mr. Brownstone", you believed it. This was not twenty first century posturing, where a fake image is manufactured to sell product to the kiddies, these guys lived it.


But the band could never follow it up. And ended up imploding.


The drummer may have been an addict, maybe he needed to go. But Izzy? The guy who added melody and texture to the songs? And by time Axl got rid of Slash, it was over. Saul is iconic, he was truly the other face of the band. And maybe if they called it Axl and…, or Bailey's Roses, or something with the leader in the title, the act could have survived. But this concoction of players was GNR in name only.


Not that the concoction did anything. Played a few gigs. Cancelled more. And supposedly worked on a new album, "Chinese Democracy".


What album's got a title YEARS before release? Isn't the title usually the last thing?


Axl would have been better off saying he shelved that record, making it an unreleased legend like "Smile", and then cutting another (or releasing the same damn work under a different name). Because by time it was finally released, people expected something in the neighborhood of "Appetite", and that was impossible.


But it was impossible for any new work to have the momentum and impact of "Appetite". It was twenty years later. MTV, the centralizing force, was dead. Radio was calcified. And the audience…was in its forties and had jobs and kids and couldn't stay at home all afternoon getting high to new music.


Times changed, but W. Axl Rose did not change with them.


And being the crybaby he is, he kept working on his album, firing people until…he ends up being managed by Irving Azoff.


Who stunningly not only makes a deal with Best Buy, but gets the album in stores.

Where no one wants it.

Best Buy advertises to high heaven. There's even publicity about leaks, which drives sales. But only if the music is good.


And in this case, no one said "Chinese Democracy" was great, and few said it was good, and the shelf life of a project that does not gain legs is…very brief today. Watched that remake of "We Are The World" recently?

But Axl got paid. Or maybe the label got paid. Someone got paid, because Best Buy wrote a check up front. And ended up losing a ton of cash. Then again, they got some people in the store. But on a selling records basis, Best Buy got fleeced. Notice the Minnesota company hasn't done any high profile exclusives since? (And hell, maybe they have, and I just haven't heard about them, proving my point…the paradigm is DEAD!)

So what does the manager do? What everybody in the world wants him to do. Lobbies for Axl to put the original band back together and rape and pillage financially around the world. Didn't Irving create this paradigm, with the Eagles back in '94? Play your hits live for TV, sell an album thereof and then charge a fortune on the endless tour?


Maybe Irving didn't propose this. Then again, he was always eager to get Steve Perry back with Journey, so the story sounds real.

Maybe Irving stopped taking Axl's phone calls when he wouldn't play ball. Maybe Irving sabotaged him. You get in bed with the devil and you live with the consequences. But unlike a Mike Curb deal, Axl wasn't bound to Irving, he could leave. And did!

And now won't pay commissions on a South American tour.


Why? Did Irving not earn the money? Were the gigs not set up under his aegis? Axl is trying to prove a point. Which is?


And Axl may not ever go back to being Bill Bailey, but everybody knows he'll eventually reform the original Guns N' Roses and go on the road. That's what bands do. The only reason the original Pink Floyd won't reform is because David Gilmour is so fucking rich, having toured stadiums without Roger Waters as Pink Floyd. Waters sued, but he lost. Waters is dying to reunite the band, everybody on the inside knows this, but Gilmour won't do it, won't give Waters the satisfaction, he's already got his fuck you money. But Slash, Izzy and Duff don't have fuck you money. They'll go on the road giving the lion's share of the money to Axl just like Joe Walsh and Timothy B. Schmit take a back seat to Don Henley and Glenn Frey. Sure, Henley can work alone. But he can't make that much coin. And as time marches on, Axl's grosses will continue to decline. And everybody needs money. Then what?


Sure, Axl's got Henley beat, he can tour under the band's name. Still…


A public figure's got no upside in picking a fight with a business insider. People have got no idea who Irving Azoff is, and they don't really care. They like GaGa, not Iovine. The person out front is the attraction. And by picking a fight for a paltry sum, Axl actually hurts his career. People go to see the train-wreck once, but how many times will they come back around to see Axl and some nobodies?


Rock and roll is a business. Irving was doing his job. Which he wants to get paid for. He was looking out for Axl Rose's best interests. Isn't that what he's supposed to do?